Understanding Drama Triangles-Boundaries in the Family 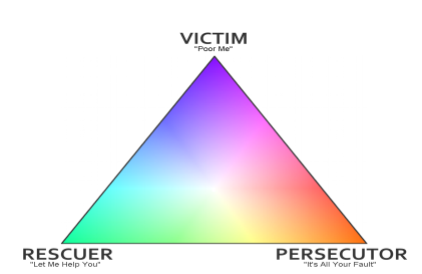 In the previous article on Boundaries, we learned that problems with boundaries can begin with attachment issues in our family of origin. Our family is where we learn about relationships and begin to develop our identity. Many things can affect a family’s ability to maintain healthy boundaries. For families marginalized by issues such as inequality, trauma, or poverty, too close or too rigid boundaries may evolve from necessity. When working with a family therapist on creating healthier relationships, it may be helpful for you to choose an affirming, culturally aware, systems-based therapist who can help you understand how these issues have impacted your family’s ability to create and maintain healthy boundaries.

Many people who have difficulty maintaining boundaries have grown up in an enmeshed family.  It’s important to understand here that enmeshed families are not the same thing as having a close and loving family. People in enmeshed families may feel lack of autonomy, and in some cases, abuse may be present. The following are some characteristics of family enmeshment:

Enmeshed families are usually rigidly role bound. Members often report feeling that no matter what they do, family members always see them a certain way, and expect certain behaviors. They may feel anxiety or guilt if they try to change the way they behave or their patterns of interaction with others.

Alliances are usually formed and broken in seeming endless dance around drama triangles. Drama Triangles are a way of describing destructive social interactions. People who are (usually unknowingly) participating in a drama triangle, find themselves playing one of three roles. These are victim, rescuer, and persecutor. In enmeshed families, people usually identify with one role, but they may sometimes play different roles…as long as they stay within the triangle. 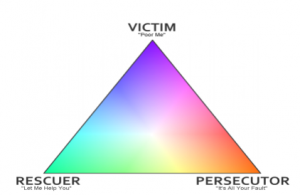 Rescuers attempt to save people they see as vulnerable. They work hard and may often offer help even when they aren’t being asked for it. Rescuers often suffer from feelings of anger and burnout. They may be the first person in a family to seek the help of a therapist  when they reach exhaustion, but may be focused on the needs and problems of others. In thinking of boundaries, rescuers act as enablers whose boundaries are too loose or permeable. They may overextend themselves to solve the needs of a vulnerable family member. They may find a sense of fulfillment in knowing that they are “always there” for people who need them. Rescuing provides an intense feeling of closeness that can reenforce and set the stage for continuing this behavior both inside and outside the family.  Victims are characterized as being vulnerable and overwhelmed. They may be unaware of how to take their own power back.  They may have a fear of independence and may sometimes behave in a self-centered manner. Family members may be drawn into caretaking a person who is identified with the victim role. Like rescuers, victims have overly lax interpersonal boundaries. Due to their dependency issues, victims may suffer from addiction or other self-destructive issues that make family members feel the need to rescue them. Persecutors tend to have boundaries that are based in rigid expectations of having others meet their needs. They avoid pain and emotional vulnerability by creating distance between themselves and others in the family through employing criticism and punishment.

An important part of understanding drama triangles is that every role has its own negative aspects. No one is winning in a drama triangle, and each role is trying unsuccessfully to get their needs met. For this reason, no matter where anyone starts in a drama triangle, they inevitably end up a victim. This is because by definition, drama triangles restrict us from behaving as healthy and autonomous individuals. One step to finding peace and health, could be more awareness of drama triangles as they happen, and challenging ourselves and others to be seen outside of that role. Next time we will learn more about how these boundary problems may continue to play out in romantic relationships.